On the 15th’s episode of The Following Roderick kidnapped Joey, was found out by Weston, Claire stabbed Joe, and Jacob gave Joey over to Ryan.

Wow. Let me catch you up. 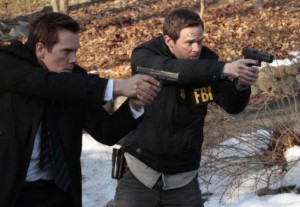 Roderick snapped after Weston saw him and freaked out, Roderick kidnapped Joey from the cult house to ensure his life was safe from Joe.

Jacob and some other culties went out to get him back and kill Roderick, Claire gets a hold of Jacob before he leaves, and tells him that Joey doesn’t belong there and if Jacob loved Joey he would let Ryan have him.

Ryan made a press conference, saying that anyone who gives up the location of the cult house is safe from jail time, now we know he can’t do that, but the culties don’t.

Someone does come up, but just freaks out on the new guy handling the case, and stabs him in the eye with her hair pin. Gross.

Roderick get killed by the FBI, Jacob grabbed Joey in the struggle, but Ryan said the same thing Claire said, and let Joey go free to the FBI and Ryans protection.

Claire freaked out when her son was gone and Joe wouldn’t tell her anything, so, she grabbed a knife, and  very actorly of her, she said that if Joe said Joey could stay away safe, that she would try to love him again. Then while they kiss she stabs him.

I’ve never been more proud of her.

But, sadly, Joe decides that it’s Claire’s turn to die.

The episode on the 22nd, says the opposite though.

Joe sets in motion some secret plan that we know nothing about.

The FBI find the cult house, after Joe has gotten everyone out. Except for one, who hung himself if the parlor of the cult house.

The public start to gather around the police head quarters, where some of the culties start to show off their plan. Some random cultie starts quoting The Mask of the Red Death to a news caster and stabs her.

Ryan gets her though because he’s the hero. Duh.

The girl says her name is Annabelle Lee, another Poe reference shocker, and doesn’t say much.

We find out that Joe has convinced his culties that Claire has to die so Ryan can be reborn.

What ever that means.

Joe, Claire, Jacob, and Emma break in to some random peoples home, pretty much kidnaps the couple living there, but makes them dinner.

He’s going to kill them anyway. To bad he doesn’t get a chance.

The cops show up at the door, while Emma and Jacob take care of it, Joe goes and is about to help, but Claire hits him with a wine bottle, stabs him with a fork or knife, gets the couple out safe, and escapes.

While Claire is running, the FBI figure out the culties plans, they are going to attack the evacuation center.

While the FBI come strolling on in, the ring master of the whole things sets the plan in motion with the flick of the wrists.

The lights go off and the weapons come out.

At least 15 culties whip out tons of sharp objects and start going to town on the innocent people in the school-turned-evac-center.
And while the FBI are searching the evac center, Joe and Claire get away on a boat, while Emma and Jacob watch from the shore.

It seems like a weird going away party for two love birds.

After Joe and Claire float away, we share a touching scene with Jacob and Emma.

But it’s quickly over after Jacob tells Emma he’s leaving the cult.

But Emma doesn’t let him leave alive. After a sweet kiss and an exchange in ‘I love you’ s, Emma cuts his throat.

But that isn’t the end.

Parker, a key player in the figuring-out-everything cult, gets taken and buried alive.

Next weeks episode, the season finale, is sure to be killer.