Even if Director Tom Hooper, numerous Emmy award winner and nominee for such films as the “Kings Speech” and the hit HBO TV mini-series, “John Adams”, wanted to produce just another musical with a more modern plot, he decided it would be best to produce a peiece combining the best characteristics of both a musical and a movie, which include the effects and cast from Hollywood and the music from Broadway.  Hooper tells the story by not doing another musical or just a plain movie, but does what only few can even accomplish or even dream of, and combines the two into a thrilling, exciting, and historic masterpiece that is built with a great cast, great story line, and amazing and heartwarming music and effects. 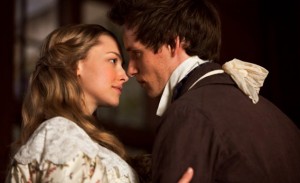 Les Miserables starts with a scene that shows the will of French in-mates, who have committed “dangerous and horrific crimes” according to the French government. It shows Jean Valjean, one of the main characters in the movie, (Hugh Jackman), sing a song that is meant as disrespect toward Javert, the prison warden (Russell Crowe of Gladiator).  Javert, 8 years later after his last meeting with Valjean,  manages to become the inspector of Paris. Bad luck plays its course in life as Valjean (under the new identity Monsieur Madeleine), now a well respected town mayor and factory owner end up in the same town as Javert.  After becoming Madeleine, he then takes it upon himself to rescue a woman, Fantine (Anne Hathaway), the factory worker who became a prostitute who became the caring loving mother that will give anything to save her child. Once in the care of Valjean, Cosette (Amanda Seyfried) and her new father travel the world blind in terms of never knowing where they will end up. But once in Paris, the site of the second French revolution, or the Student Revolution, starts the always favored romance by directors and actors, love-at-first-sight between Cosette and Marius (Eddie Redmayne), a freedom fighter. But where ever Cosette and her father wind up, Javert somehow manages to cross their paths, not figuring out who Monsieur Madeleine really is and why he is so familiar to him until later in the movie.

Throughout this brilliant film, Hooper adds music that even a common audience will fall in love with. What is perhaps even more impressive than any other aspect of the movie though is the fact that every actor/actress sung each of their songs not in a studio first and then lip singing on camera, but did their singing on camera. Perhaps the most important aspect of this movie is that it shows that anyone can redeem themselves and that one action does not speak for their life but a series of challenges and accomplishments mark a man’s soul. The French revolution is something that not every person is able to enjoy.  So by adding in some music, and even a fascinating story line, he manages to make it ten times more interesting allowing even the common person who does not enjoy documentaries, enjoy this film which shows the historic point of view but also the cultural aspect of Les Misérables. This is a must see movie and  Hooper could not have done a better job. Score: 10/10.