We have all known a “Twihard”. Even though many such die-hard fans of the Twilight series (based on author Stephanie Meyer’s books) will be sad that the series is over, the last movie Breaking Dawn: Part Two, was an amazing finale to the books, movies, and many items of merchandise found in any Hot Topic store. 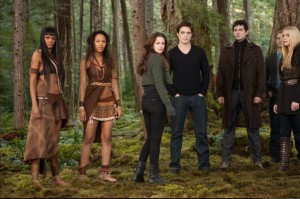 For  those of you who haven’t read the books or seen the movies, Twilight is all about a 100+ year old vampire who falls in love with a human girl who just moved to a new town. Through out the series, the couple faces tons of challenges that test their relationship, but, as we all know, true love conquers all.

The movie starts out very different from any of the others. Bella Swan, played by Kristen Stewart, does not narrate a peaceful aerial view of Forks, Washington, the book’s setting. Instead, the film starts off darker, with many different red images flashing on a loop; as the loop goes on showing the main characters’ names, the images slowly turn whiteish, then quickly to all white. I thought this was symbolism for Bella’s change from a “beating heart” human to a vampire, an icy creature of the night.

The movie’s plot for the most part stays close to the books: Bella’s waking up, her first hunt, the works. What I didn’t understand was the logic behind the fast camera movements. We all understand that, being a vampire, Bella moves quickly, but blurry people and scenes are just wasted movie time.

When Renesemee Cullen (Bella’s half-vampire daughter), played by Mackenzie Foy, is first introduced, it’s very sad. The way she is portrayed as a rapid growing child is done with badly executed computer-generated effects; she doesn’t even look like a real baby. However, she does start to look more real when they actually bring in the actress later in the movie.

Don’t worry fans, Stewart actually has emotion and facial expressions. Edward, played by Robert Pattinson, feels very more ‘Edward’, and Foy doesn’t have more then five lines though out the movie so it’s hard to tell if the kids got the acting gene.

The middle of the movie is pretty slow and very close to the books, but more or less, uninteresting for those who didn’t read the novels, or even for those who did. However, the film picks back up at the end when the Volturi, vampire council, come to check in on what they suspect is a big no-no on the Cullens’ part.

Twists and turns take viewers down a very different road from what any fan would remember from the books at this point. I was clinging to my mother’s hand and my heart was pounding; everyone in the theater went nuts. Once the dust is all settled, the two love birds that the whole universe of Twilight is centered around, sit happily in ‘Their Meadow’.

Aro, played by Michael Sheen, and head of the vampire high concil, was just the right amount of creepy to add comic relief to the heart stopping twist. With his weird laugh and sudden unexpected reactions, he was just weird.

The ending of the movie was okay, it didn’t do the book justice when one considers years of time spent fangirling over four books and five movies. It was, to say the least, cute. A song starts up about loving someone for a thousand years to finish off the last movie. It was very fitting, and was very cute, I was singing along within ten seconds.

Make sure to stay for the ending because they show every single important person from all five movies as a recap to end the saga. With such a good finale, however, the Twilight fandom will never truly end. Score: 8.5/10