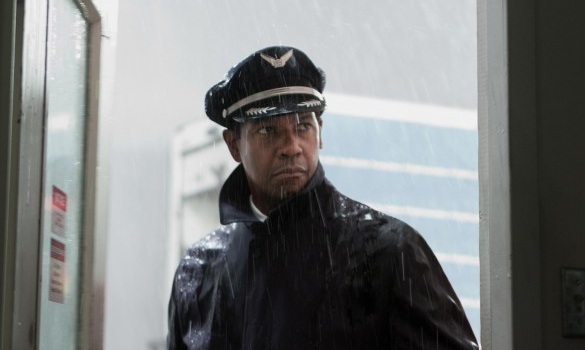 Robert Zemeckis (Back to the Future, Who Framed Roger Rabbit?, Forrest Gump) spent much of the last decade of his career foraying into and evolving animated features; Flight marks at least a momentary return to more dramatic fare. And what a jolting return it is as we awaken to the sleeping, hungover Capt. Whip Whitaker (Denzel Washington)—with the glazed eyes, stale breath and dry tongue of a fuzzy alcohol and cocaine binge aftermath—resurrected from sleep by a phone call from an ex-wife asking for tuition money for a child Whitaker has not seen or spoken to for three years. A lot to take in hours before he is to pilot a plane “carrying 102 souls on board” to Atlanta.

As the film’s trailer alerts seconds into its first cut—I assure you I’m not spoiling anything—the plane falls into a nosedive, with no readily apparent cause. But good ol’ Whip arrests the impending doom by rolling the plane so that it is literally gliding upside down before he realigns it right-side up and emergency lands it with locomotive force on the lawn of a church (now without a steeple).

More emphasis is placed on the goings-on on the ground, however, in Flight. The investigative arm of the FAA recreates the conditions of the flight with simulations, interviews every survivor, picks apart the craft’s black box and performs toxicology reports of the crew members. This last detail is the clarion call for Whitaker’s undoing, for his blood level contains triple the legal limit for drunk-driving, a fatal sin that does not play well on the news alongside the death toll of six passengers in the crash.

Flight is not a movie about plane crashes. It is a movie about demons. How they gestate over years of indulgence, alienate the loved ones around you and the great difficulty in exorcising them. Washington plays that intra- and interpersonal strife as if he’d spent years among functioning alcoholics and white-collar junkies before taking on this role. Here he evinces one of the most emotionally complex performances of his career amid a crop of swaggadocious gangsters and slick detectives he’s so used to bringing to life.

Washington’s whirlpool of indefatigable deception is aided by a script that moves like the dynamics of an orchestra: subtle, low notes underscoring intermittent swells of intensity like the very real feeling plane crash (one of the best first 20 minutes in cinema history), the verbal sparring between Whitaker and his drug dealer / confidante Harling Mays (John Goodman) and the imminent FAA hearing that will decide Whitaker’s fate as spineless “hero” who walks free or redeemed addict who pays penance for his actions. Score: 8.5 / 10.