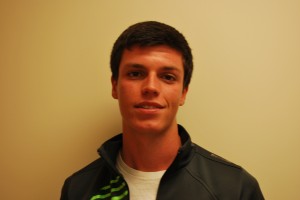 Magee played soccer as his primary sport freshman and sophomore year, but with his parents push (both of whom ran cross country at Auburn), he continued to focus more and more on running.

“My coach, my team, my parents, they’re always there for me,” said Magee.

The progression caused by this intensified focus has been evident. At the regulation 5k distance, Magee ran a 17:40 freshman year, 17:24 sophomore year, then he ran 500 miles over the summer.

Junior year Magee posted a 16:08 best time, and after running 500 more miles over this past summer he hopes to break 16 minutes by the end of the season. Currently his best time is 16:05.

The top five runners on the boys cross country team are seniors this year, making the upcoming district meet that much more important and the county meet victory that much sweeter. Warrior “boss” cross also has Magee’s younger brother David, who does occasionally place in the top five on the team.

“We’re just like a big family now, we’ve been doing the same thing for four years,” said Magee, “You run individually in the race but the top five guys score, so you’ve got to rely on the other guys to do their job just as they rely on you.”