Bethesda Softworks is a game developer known for its expertise in open-world games, yet Dishonored is much more linear.  Even so, the game proves to be a contender to be game of the year. With revenge in their hearts and a blade in their hands, gamers set on a quest to kill the one responsible for their fair empress’s death.

The game begins with our protagonist, Corvo, returning to the industrial city of Dunwall to his empress that he has been assigned to protect. Before his return (not played in game), Corvo was searching for help because the city is laden with a deadly plague that is infecting citizens at an alarming rate and turning them into “Weepers”, or horribly sick citizens who  unwillingly infect other citizens.

The empress is assassinated, and the heir to her throne is kidnapped, and Corvo is ultimately framed. You are thrown in jail and a friend breaks you out;  from there, the story begins.

One would think the game would be an advanced version of cat and mouse across 9 missions inching closer to finding the bad guys, but really it isn’t. The story unravels as players learn secrets of the corrupt government, and the focus changes from just catching bad guys, to exposing the twisted government and finding out who the real enemy is.

The game throws in a few somewhat predictable twists and a nice ending to close it all up. Yet, there are multiple endings, and I only saw one. Your ending really depends on who you let live,  who you killed, and how stealthily you played the game.

The game is famous for the fact that you can play it however you want. There are achievements/trophies that reward players for not being seen and not killing a soul during the entirety of the game. You can slay every person you see or you can sneak behind enemies and knock anyone out who you need to.

You mix physical weapons (your sword, handgun, crossbow, etc) with your powers (blink:  sh0rt-length teleportation and  possession, a very limited system where you can take control of enemies and animals alike, etc) to create this amazing super soldier. Combat is amazingly fun and never gets repetitive. 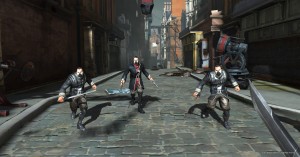 Every assassination target can be taken out in a non-lethal way, be it by branding the heretic’s mark onto a heavily religious, albeit corrupt, priest or by spreading an enemy’s secrets over the national airwaves.

The AI in the game is pretty good, but could use improvement.  enemies would look under tables and around corners for me, and often would find me if I didn’t hide well enough. However, using the lean button to peek around corners, you can literally stare at an enemy in perfect light and not be seen, its kind of ridiculous.

The game has a very “steampunk” feel to it. Dishonored seems to give every workman goggles and Dishonored‘s version of steam, “whale oil”. Everything is powered by whale oil and it is heavily advertised in the game with assorted whale snacks and common talk of  whaling. It’s a repetitious and a subtly humorous topic.

The game has a lot of black, but I guess that’s because it’s a dark game, or more boldly, because it is a stealth game. I also noticed later in the game when enemies started using more spotlights to find me, that the whites in the game are really bright. It creates an odd contrast and I really can’t tell if I like it. It looks nice in screenshots, but it sort of hinders the player’s ability to sneak.

Dishonored is one of the few solely single-player games made lately that is worth the $60 price tag, or at the very least a rent from RedBox or GameFly. With one of the deepest and interesting stories, and amazingly fun and fresh gameplay, this game needs to be on your console or PC as soon as possible. Score: 9/10.