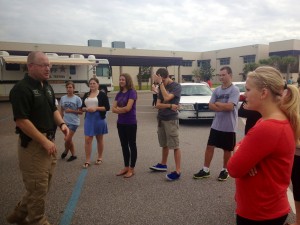 The Hillsborough County Sheriff’s Office brought the DUI Squad to Steinbrennner High School earlier this week to educate drivers education students on the dangers of driving under the influence. The program has been ongoing for 4 years prior to last year when it had a hiatus and is paid for by a grant from the Hillsborough County Sheriff’s Office.

The program comes to driver’s education classes in Hillsborough County and is divided up into different stations. The stations each recreate certain situations drivers may face from driving under the influence.

The first station is a field sobriety exercise.

“We actually have fatal vision goggles, it’s the closest thing that we can have someone use as far as showing them impairment of alcohol and drugs,” said Deputy Larry Morrell.

The second station is a pedal cart that demonstrates attention and mobility that someone has to deal with while operating a moving vehicle. This station also uses fatal vision goggles.

The last station is a presentation where they talk about underage drinking, the 02 violations for drivers under 21, and demonstrate the breath test that would happen if someone was pulled over accused of driving under the influence.

When asked about the effectiveness of the program, Morrell said “I think it is, just by the response we get, we have been doing it the last four years and we have a good response from the kids…We encourage the questions… A lot of kids are unaware of the O2 violation..”

The O2 violation is in place only in the state of Florida, if someone is under the age of 21 and are driving under the influence and are stopped for being suspected of driving under the influence, just because they have alcohol in their system and the officer smells it, they can put you through a portable breath test on the scene and if they blow and its O2 or higher, their license will be suspended for 6 months automatically and if they refuse to take it, their license will be suspended for a year but with no criminal action.

“I’d like to have at least more full time… We keep on doing as much as we can…” said Morrell on the future of the program. The program visits four schools in Hillsborough County on average and Morrell hopes to expand the program to visit more schools in the future.