LA Street Corner. Dusk. The sun orange on the horizon. Two hit men discuss the possibilities of shooting people in the eyes. Beat. A masked serial killer strolls up behind and them and Pow! He shoots our waiting strangers in the eyes like a malevolent Godot who’s finally arrived. 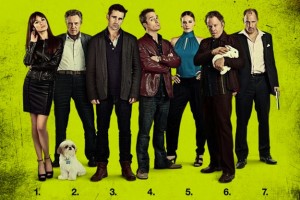 This is Psychopath #1 in the cabal of idiosyncratic murderers we meet through the eyes of Marty (Colin Farrell), a screenwriter who is having a tough time finishing his own screenplay, titled “Seven Psychopaths”. Among the other psychopaths is Charlie (Woody Harrelson) whose search for his lost Shih Tzu, Bonny, sets this whole bizarre circus in motion. There’s Billy (Sam Rockwell), Marty’s eager friend, and Hans (Christopher Walken), a dog snatcher who kidnaps dogs only to “find” them in response to MISSING DOG posters and collect the rewards. Billy, who occasionally works with Hans, happens to know the whereabouts of the yipping little Shih Tzu, and in his flight from Charlie’s gangster brutality, drags Marty along with him through the deserts of Southern California. Then there’s Zachariah (Tom Waits), a bunny-toting retired serial killer of serial killers who gave up his life of bloodshed when the love of his life (the Bonnie to his Clyde) left him when he would not help immolate the famous Zodiac killer.

Marty represents all the frustrations of this movie’s writer-director Martin McDonagh, for he and Farrell’s character want to write “a movie about psychopaths that isn’t all blood and guts and stuff.” Marty—and Martin—want a psychopath flick with “heart, a real love story.” It’s this proclamation that lends to this movie’s brilliance: the perils of cliche. Marty makes a list on a legal pad of the psychopaths that should be in his movie, and he encounters the very people he starts describing, owing to the futility of coming up with a serial killer who’s never been done before. Hans, after reading a portion of Marty’s script, notes how all the female characters “can barely string a sentence together or they die after five minutes.” It won’t be difficult to guess what happens, then, to all the female characters who briefly turn up in the paths of our killers.

Like McDonagh’s earlier films, Seven Psychopaths occupies a dark and chilling world of misery, dealt with, though, by bumbling and hapless caricatures. Rarely are hit men and chainsaw-wielding lunatics this charming, and under McDonagh’s direction Walken and Farrell and Rockwell slip into their roles here like Jason Voorhees into his hockey mask. Score: 9/10.