Three years ago, gamers across the world were treated to a masterpiece full of millions of guns, a plethora of enemies, and a formula for a great night of playing with friends. On September 18, the second volume of the Borderlands trilogy hit store shelves with gazillions of guns, an uncountable number of enemies, much more marketing money, and a whole lot of fun for player’s and their friends to enjoy together. 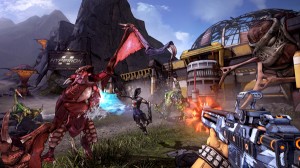 The simplistic loot system that gives the whole game its unique and rewarding gameplay which was present in the previous game returns. Guns are randomly generated so that no one ever has the same gun. Gamers are treated to more elemental damage types, new scopes, new weapon brands, etc. Overall, just better, bigger, and awesome-er.

Grenades were also given an extra boost. They can now home in on targets, split into smaller grenades, teleport right into enemies faces, pop up off the ground and spit fire in every which direction, I could go on. The coolest part is that often these abilities are combined for instance, at one point, I used a grenade that homed in on a target, created a singularity that sucked in every enemy around that central one and then blew up. It provided instant satisfaction and great crowd control.

The original borderlands gave players four classes to choose from (The Siren, The Soldier, The Hunter, and The Berserker). All classes had a giant skill tree which let players customize their character and suit it to their own play style. Borderlands 2 brought this concept back with the same four class basics (a mage, a everyday soldier, a long-ranged soldier, and a tank)  but with much more customization.

Now players can go on the Gearbox website and plan out their skill trees from start to the end and track what they have to do to make their dream character.

Whilst playing, one of the most notable changes was the difficulty. I was constantly stumped on bosses when playing alone and had to grind through previous areas to level or up find better guns.

It wasn’t until later that I realized that I was missing the whole point of Borderlands 2, teamwork. So I called up a few friends I hadn’t talked to in a while and we played for five hours straight.

I gained a bond with them through the looting, the reviving, the pillaging, and the rage that I couldn’t have even attempted to do in person. We always had some enemy to shoot or funny dialogue to laugh at.

There is a new trade system where players can now enter a menu and not have to throw guns or money at the ground and risk the fact that someone could cheat and pick up their weapons and money without paying up.

I did notice a few bugs whilst my time with the game. Mostly it was just a quest problem where an enemy should have dropped something but didn’t, so I would have to re-load the area and fight them again and the problem would be resolved. .A.I. problems were prevalent too, some enemies just didn’t seem to notice me, this wouldn’t be a problem, but when fighting a boss, I almost felt bad.

In the original Borderlands, it became very story driven and this wouldn’t be a problem if the story wasn’t dull and underwhelming. The ending was horrible. Players were promised to enter a vault that contained more loot than an adventurer ever needed yet the vault closed before the adventurers could even touch it. It was a big let-down and people still complain about it today.

Borderlands 2 is a vast improvement.

The game returns with four new Vault Hunters: Maya the Siren, Axton the Commando, Zero the Assassin, and Salvador the Gunzerker. They heard word of a Vault on Pandora and each made their own journey to the planet in search of riches.

The game now gives players a central antagonist named Handsome Jack. He is one of the Hyperion corporation’s higher ranking goons who uses style and power to destroy his foes whilst making fun of them. He is the only person standing in the way of their trek to the Vault. He has obtained the key to the Vault and is charging it up so he can open it himself.

He and his corporation have come to Pandora to mine the precious element Eridium which has seemed to magically appear after the opening of the Vault in the original game. It generates much power along with giving Siren’s (a very rare kind of superhero with special mystical powers i.e. Maya’s Phaselock or Lilith’s Phasewalk) a great boost to their powers.

In order to mine safely and in an orderly fashion he has been trying to eliminate bandits and creatures alike.

It was an exhilarating experience to fight alongside with my friends or the characters from the previous game in order to take down the nefarious Handsome Jack. 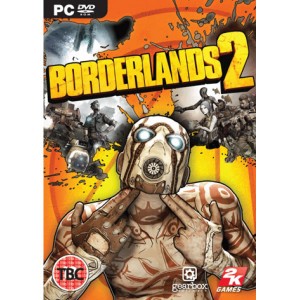 The ending of the game was oodles better than the last game, it left me with a great feeling and really tied up all the loose ends I needed it to (and even opened up some new ones).

There is something unbelievably beautiful about Borderlands “comic book” look. Everything is outlined and shaded with beautiful colors.

The game returns with a completely remastered U.I. that is super synergistic. Nearly all menus are holographic and look amazingly cool.

Explosions supply an appropriate amount of disorienting camera shake and flares of yellow and red along with possible grenade augmentations including acid, electricity, or slag that add flares of color to the already bright and colorful explosions. It’s as if someone threw paint at your screen every time you threw a well placed grenade.

It seems that they have made the game incredibly more colorful and have strayed from the very common desert environment incredibly present in the last game. Players now trek through grassy highlands, frozen tundras, acidic caverns, and volcanic plains each with there own color palettes.

This is a game I will never forget. I waited 2 years, lost a letter grade in chemistry, and spent $150 on the game and was never underwhelmed or ever felt let down. It is funner with friends, but it’s still amazingly rewarding and fun playing alone.  It’s technical problems can be solved with patches in the coming weeks and are honestly just minor speed bumps on the crazy road that Borderlands 2 takes you on. 9/10.