Okay, I’ll admit it: I couldn’t uphold my promise. I promised, when I reviewed Lil B’s God’s Father mixtape in February, that I would be reviewing all of his subsequent releases. But since then, Lil B has released not one, not two, but three albums. Three albums. Most artists release three albums in the course of three years, not three months. I tried to review the one that came immediately after God’s Father, which was entitled #1B—-, but what resulted was incoherent and so I scrapped the whole thing. When BasedGod released the BasedPrint 2 mixtape on April 9, I didn’t even attempt to listen to it.

But when news of Trapped in Basedworld reached me, I felt oddly compelled to give it a try. And the more I listened, the more grateful I was for the existence of this strange little schizophrenic man we call Lil B. 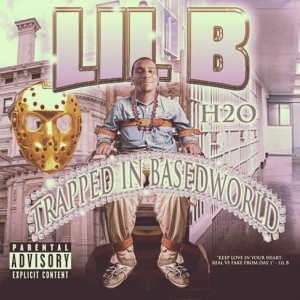 Anyone who approaches Lil B’s music by trying to criticize its lyrics, beats, production, flow, or any other criteria, will come away viewing Trapped as a mess of monotonous, repetitive absurdities, a heap of dumb lines droned over sloppy beats. But to approach it with any semblance of seriousness would be to take the entirely wrong approach. It is essential to an understanding of Lil B’s music that the listener be able to laugh at just how stupid the things he says are. What on earth could he possibly mean, for example, by “BasedGod look like you / 50 what it do”? These songs, with their ridiculous lyrics and even more background vocals (in which Lil B editorializes over his own flow with random interjections like “Swag!” or “Based God!” or “Wow!”), cannot possibly be made with any serious intentions in mind. I truly believe, down to my core, that Lil B does not think of himself as a good rapper or lyricist per se.

Trapped in Basedworld is a far wilder mixtape than God’s Father, to be sure: it seems that with every effort Lil B gets more bombastic, more drunken, and more unpredictable. Who, could have predicted, for example, the 200 interjections and comically overproduced outro to the hilarious “Connected In Jail”, the monotonous catchiness of “4 Da B—-Mob” and “Ski Mask Thuggin”, whose repetitions become almost like mantras, impossible to dig out of the head. Who could have predicted that Lil B would scream, downright scream (“AUUUUUGGGHHHHH!”) over the entire duration of “B—- Mob Gangsta”? The only way to capture the essence of Trapped, or any Lil B album, is to admit from the beginning that it cannot be captured. Perhaps, if there were one image that could come close to conveying what it’s like to hear the Based God, it would be waking up one morning to find that it was raining flaming dog feces from the sky: repulsive, almost horrifyingly strange, but at the same time almost wondrous in its absurdity.

“BasedGod’s here f—– ten b—— / Call me Lil B I have many b—– / I woke up and then I called ten b—– / I believe that you don’t have this many b—–,” Lil Boss raps over the tenth track, “You Swim”. I nodded, understanding exactly what B meant, and let the track play on. By the time Trapped is over, Lil B’s absurdities are hardly even absurdities anymore. He has his own language, his own BasedWorld, and it’s almost refreshing to visit its hilarious shores, to take a break from serious music consumption. The album’s not good for much after a few listens, and spending too long in BasedWorld can cause headaches, but as far as I’m concerned, Lil B’s presence is a welcome one in the rap world. His music must really be experienced, not read about, so I’ll post the download link again. Hopefully you too can understand the nonsensical, self-aggrandizing meta-parody that is Lil B’s music. Score: 7/10.

You can download TRAPPED IN BASEDWORLD here (it’s free and easy and safe, we promise).