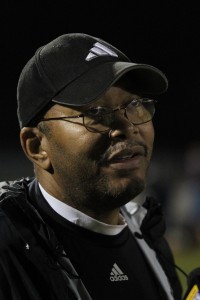 Robert Woodard has resigned as Steinbrenner High’s girls soccer coach two months after leading the program to the Class 4A regional semifinals.

Warriors athletic director Eddie Henderson confirmed Woodard’s decision on April 10, but declined to comment further as to the reasons why he did so.

Woodard, who previously served as an assistant boys soccer coach at Jesuit and Bloomingdale in the mid-1990s, led the team to its third straight district championship with a 2-1 double overtime victory against rival Freedom.

Steinbrenner went 16-4-2 during Woodard’s first year at the helm, including an 8-0 victory over Bartow in the regional quarterfinals. The third-year program also won the Sarasota Holiday Tournament in December.

The opening means the Warriors must find their third coach in as many years. Woodard was hired last August to replace former coach Teresa Patterson, who retired from coaching in May 2011 to start a family.

Patterson led the Warriors to the 4A state title in 2011. She started the program in the 2009-10 season after spending one year as Gaither’s coach.

Steinbrenner loses only three seniors to graduation, but two of those are forwards Cici Gonzalez and Taylor Valley. The two had 16 and 13 goals, respectively, the most and second most of anyone on the squad.

–All stats as recorded to Maxpreps.com by coaches