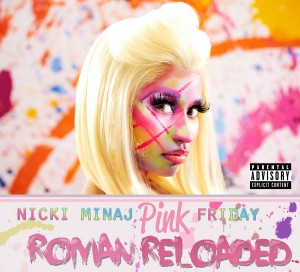 Nicki Minaj has a way of sounding extremely exhausted when she’s rapping.

And for the first half of her new album Pink Friday: Roman Reloaded, anyone who dislikes Minaj’s rap will feel the same way when they hear the vomit-like verses jumping into their ears.

While listening to songs like the opening track “Roman Holiday” (made infamous when performed on the Grammy’s) they may very well question how serious Minaj is.

From stating that she “Beez in the trap,” (what?) to warning her haters that she is going to put her “d—” in their faces on “Come in a Cone,” and even claiming to “Columbine” them in “Roman Reloaded Featuring Lil’ Wayne,” the album appears to be a big mess. After the first nine songs, it seems completing it is futile, and the best thing to do is turn it off, and attempt to oppress the entire listening experience to the very back of the mind.

However, by doing this, the listener may miss out on the treat of the album. It seems as though halfway through, after several obscene songs featuring dud guest rappers, Minaj managed to figure out how to please her entire audience. She begins to grow on the very niche that gave her so much popularity, and grows on it. Starting with her hit “Starships”, Minaj switches from the provocative lines of filth, to the catchy, fun dance tunes that she can perform so well.

From the incredibly entertaining “Pound the Alarm”, to the slower “Marilyn Monroe” that showcases her true singing, and ending with the much talked-about (and hilarious) “Stupid H–”, Minaj proves that all the hype for the pop sensation is justified.

It isn’t understood until this shift what Minaj’s intentions are for the album. It’s realized that her rap lovers will find her first half irresistible, while her second half will make her pop lovers begging for more. Each half is intended to excite a different demographic. And she does this perfectly.

Even if the listener doesn’t like one half of the album, they still have nine or 10 songs that they can enjoy, the length of a typical album. And nine or ten songs, which makes for about thirty minutes of music in either genre, is still quite a bit of good music. The extra amount of effort (and songs) Minaj put into the album may be surprising, and a bit unsettling at first, but her reasoning is spot on and she should be commended for this.

And although each member of her audience may not enjoy the album as a whole, by producing something that can potentially make her whole audience content, Minaj has accomplished something that very few contemporary artists are able to do: straddle two genres, and do them both well at the same time. Score: 7/10.