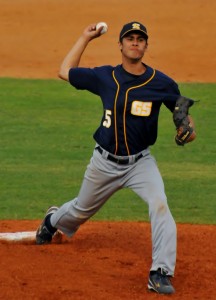 TAMPA – The Steinbrenner baseball team knew it had to set the tone early if it wanted to get past Gaither in a key Class 7A-District 9 contest on March 30.

It only took one pitch in the first inning for the Warriors (11-6) to get its offense rolling when shortstop Stone Ramsey led off the game with his fourth home run of the season. Steinbrenner had the Cowboys (10-7) playing catch up the rest of the way and won 6-4.

Warriors’ pitcher Chris Williams, who battled through the stomach flu leading up to the game, tossed six solid innings giving up just two earned runs while striking out four batters.

He said it felt like his best outing of the year despite the illness.

“I honestly have no clue how I did it,” Williams said.

Williams was nearly perfect through the first four innings and his offense helped out with big hits with runners in scoring position. After Ramsey walked on four pitches to lead off the third inning, center fielder Kevin Merrell put down a bunt to move the senior to second base and got aboard himself after Gaither pitcher Evan Gainey committed a throwing error.

Bautista, who finished with three RBI, said it felt good to finally get the hits when it counted.

“It feels great; I just tried to put the ball in play,” Bautista said. He then added, “I’ve been trying to do too much lately in the past, but it feels great to drive the guys in.”

In the fifth inning with his team trailing 5-0, Gaither senior outfielder Hayden Kelley doubled to the wall in center field to drive in Eddie Pestrana to cut the lead to four.

The Warriors snagged an insurance run from Bautista in the sixth inning to stretch the lead to 6-1, but Gaither began to rally in the bottom of the seventh.

With Williams’ night done, Bautista was brought in to close the game. He sat down Jacob Gowen on strikes and forced Cody Robinson to pop out to start the frame, but Gaither strung together three straight hits including a two-RBI double by Florida State University commit Oscar Mercado, and the Cowboys climbed within two runs.

The comeback came up short as first baseman Jose Gonzalez flew out near the warning track in center field to end the game.

Gainey took the loss for Gaither in a complete game performance which included four walks and seven strikeouts.

“I faced Evan Gainey and he’s 4-3, but he should be like 7-0,” said Williams, who improved his record to 4-0. “That guy is just a stud. He’s had some rough times with his defense and stuff, but he’s a great pitcher.”

The win gives the Warriors a shot to clinch the No. 1 seed going into the 7A-9 tournament April 23-26, something Williams said gives them momentum.

“It was a great team effort tonight,” Williams said. “We’re on a roll baby and it looks good.”

One thought on “Williams, Bautista solid as Steinbrenner gets past Gaither in key district game”