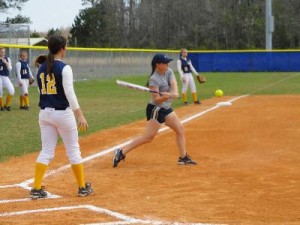 Steinbrenner coach Colleen Sanders practices with her team prior to a game. (Oracle File Photo)

Two seasons removed from its first district title, the Steinbrenner softball team is proving once again to be a player for the championship.

Third-year coach Colleen Sanders said the Warriors (9-4) have embraced the team mentality and are hungry for another shot at a title after finishing third in the district last season.

“We’ve had a lot of talented incoming players, and we’ve been able to really put together a very strong lineup,” Sanders said.

One pivotal part of the team’s success has been pitcher Kellee Ramsey (6-3, 3.39 ERA). The sophomore said claiming the district crown is a big goal that everyone has been working toward, but she doesn’t want to stop there.

Sanders added that the team’s desire to get back on top has made an impact across the board.

In order for the Warriors to clinch the No. 1 seed in Class 7A-District 9, they will have to get past Chamberlain. It’s a game that has been circled on the calendar since Day 1.

The team nearly got the better of the Chiefs last month, but fell on the road 4-2. Sanders said while the game went down in the loss column, plenty of good came out of it.

“We knew coming into the season that Chamberlain was going to be our best competition in our district,” Sanders said. “They’re always a tough team, so we’ve got them again in a couple (days), and I think in that first one we really gave them a run for their money. … We’ve got the bats, and we’ve got the good pitching to do it again.”

Ramsey echoed her coach and added the chemistry between herself and junior catcher Alia Serafini has been the reason behind her success on the mound.

“I’ve played with Alia ever since I was like 8, so before going into high school me and her knew each other and I think that’s helped,” Ramsey said. “She really does boost my confidence when I’m on the mound.”

The Warriors host Chamberlain on Tuesday, March 27, before traveling to Gaither on Friday, March 30. Both district games start at 7 p.m.

Steinbrenner hosts the 7A-9 tournament, with the championship game on Thursday, April 19 at 7 p.m.

–All stats as recorded to Maxpreps.com by coaches