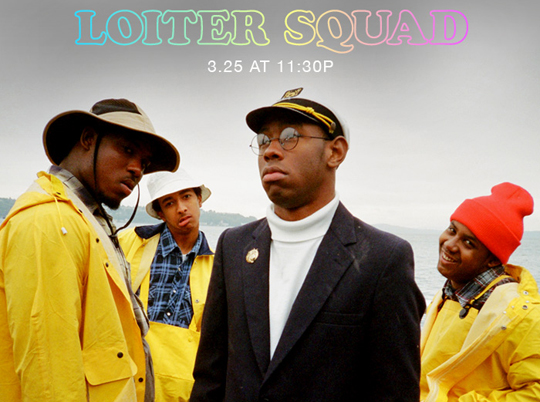 Expect the best. Prepare for the worst. That is the mantra to repeat out loud to yourself before tuning in to [Adult Swim] on Sunday, March 25 this weekend for the premiere of hip-hop collective Odd Future’s new television show, Loiter Squad. The show, featuring de facto group leader Tyler, the Creator and other Odd Future members Jasper Dolphin, Taco Bennett and Lionel Boyce, comes after the recent March 20 release of The Odd Future Tape Vol. 2, the recipient of raving and lukewarm reviews.

Following Tyler, the Creator’s VMA win, the group made mention of the show in a Billboard magazine interview. The group revealed that “the show will resemble … a mixture of ‘Jackass’ and ‘Chappelle’s Show,’ featuring sketches, man-on-the street segments and pranks.” Whether or not this dangerous and well-done hybrid is what the late-night line-up needs (or wants, for that matter) remains to be seen. If the show fails to attract an audience or the jokes peter out before episode’s end, at least it won’t be the first failed attempt by a musician to play the huckster on the small screen.

Let us know what you think after the premiere of Loiter Squad Sunday, March 25.