Come August, when graduated seniors venture off to state colleges and universities, senior Daniel Davis will be moving over 1,000 miles to Montclair, NJ.

Davis will attend Montclair State University as a part of their prestigious musical theatre program which has produced famous alumni such as actors Jason Biggs from the American Pie comedy series and Bruce Willis who has starred, among many others, in the Die Hard franchise.

According to Davis, the Montclair State Musical Theatre program he was accepted into is one of the top twelve musical theatre schools in the nation. Over 1,500 people audition each year and approximately 18-24 are accepted.

“It was very nerve-wracking because I had to go all the way up to New Jersey for it,” said Davis.
Davis has dreamed of being a Montclair Red hawk since he was seven years old and traveled to visit the school with his parents—both of whom are alumni.

“I saw it the first time and I knew I loved it,” said Davis.

Davis, who was drawn to Montclair due to its proximity to New York City (it’s only 12 miles away), auditioned on Nov. 19. 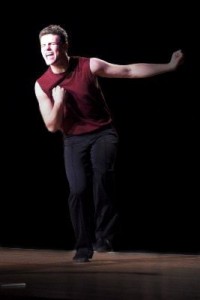 The audition included an hour of ballet dancing, an hour of jazz dancing, singing two songs and performing two monologues.

“I sang ‘My Friends’ from Sweeny Todd and ‘What Do I Need With Love’ from Thoroughly Modern Millie,” said Davis.

Though difficult, all his hard work paid off when he was informed Dec. 5 of his acceptance.

“It was funny because it was my dad who got the mail, and I was doing chores all day long. He got the mail at 1 p.m. and didn’t tell me until 4 p.m., so I was really mad at him for holding it for that long without giving it to me,” said Davis “I freaked out and went and called all my family, my friends and all my parents’ friends in Jersey.”

According to Davis, he will be attending the school for a Bachelor of Fine Arts in Musical Theatre and will most likely minor in education at Montclair.

His major, which is 192 credits (98 for musical theatre and 94 for general education) has an acceptance rate of less than 3 percent.

“They have really great training. I went and saw a couple of shows there ,and everyone is really professional,” said Davis.

Davis has very high expectations for his time at Montclair and his future afterwards.

“I know I’m going to be with fun people. I expect to work in a really professional environment, though, which is really big to me.”

After graduation, Davis plans to move to New York City where he’ll try to “make it” as an actor.

Knowing that the average actor makes around $34,000 a year and “very few people make it to Broadway,” Davis has a backup plan.

“I’m going to, of course, hold another job between auditions. If it’s bartending, then it’s bartending. Everyone who performs, unless they’re really big, holds a second job,” said Davis. “It’s a hard life.”
With Davis’ relentless passion and professionalism for Musical Theatre on stage and in life, some might assume he’s had years of training and coaching.

Davis, however, has a secret.

“To this day I have never had formal training.”

With a laugh, Davis says college is for getting the actual music training.

“I couldn’t tell you a thing about music theory, but I can sing a song and make you feel things.”

This self-taught performer started Musical Theatre as a freshman at Alonso High School where he landed the role of Zeke in High School Musical. The show, while not being one of Davis’ favorites, proved to be a catalyst. From that point on, he landed a role in every play he ever auditioned for. After two years at Alonso, he departed for Steinbrenner.

“I left a really good program but came to an even better one,” said Davis. “The people here are better, and I’m not even talking just more talented. They’re better people and are so dedicated.”

Davis has been here for two years and has played many leads such as the Emcee in Cabaret, Mr. de Bonnefoi in The Imaginary Invalid and the Pirate King in the recently produced The Pirates of Penzance. He has also done sound for the Talent Shows and the play The Crane Wife.

Though his high school musical theatre career is winding down, Davis has been incredibly influenced by the Theatre Director Lindsay M. Painter and his fellow cast mates.

With his hardworking attitude and dedicated lifestyle, Davis has high hopes for transitioning from his high school legacy to Broadway.