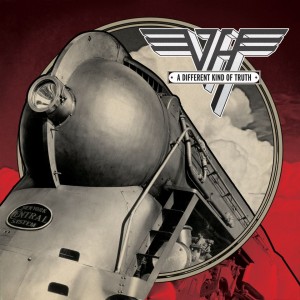 The controversy about whether or not old dogs can learn new tricks is not likely to be over any time soon. Plenty of ancient classic rock bands have stuck around well past their prime and been ridiculed for it; a successful comeback is hard to stage.

What band out there is older and doggier than dear old Van Halen, who’ve somehow managed to release another album, almost fifteen years after 1998’s godawful Van Halen III. This album, titled A Different Kind of Truth, is only saved from being another addition to the classic-rock-comeback junkyard by the return of flamboyant former frontman David Lee Roth, who considers himself less of an old dog than a “Sexy dragon legend,” as he roars on the album’s first track and first single, “Tattoo.”

Thereafter, the album is a burning automobile wreck, and I mean that in the best possible way. When I say that Roth saves the album, I don’t mean that he overshadows everyone else, because band namesake Eddie Van Halen’s shredding is just as razor-sharp and thrilling as it was decades ago. Eddie’s son Wolfgang has also joined the gang on bass, but in all honesty, this is hardly noticeable. What’s really noticeable is the drumming, which is as invasive and ostentatious as Roth’s trademark spandex pants. Roth is the only member of the band who seems to have retained any charisma. With any vocalist but him (or maybe Geddy Lee, just for kicks and giggles) the album would sound like one of the garage-recorded jingles in furniture store commercials (see “Blood and Fire” and “Bullethead” for prime examples).

And even then, I’ve got to concede, Roth’s lyrics and singing are, for all their entertainment value, unconvincing. For the first few songs, his boastful verses and cathartic choruses are refreshing, but by “China Town” I realized that this man is just as old as my father and that he doesn’t still court a different woman every night and hang out in dangerous parts of town. Once this realization sinks in the rest of the lyrics seem unfortunately canned.

Still though, one has to give Eddie, Dave and the gang some credit. If you’re into this sort of thing the driving riffs on “Big River” and the solos on “Beats Workin’”, the album’s final track, certainly won’t disappoint. As far as Van Halen albums go, it’s got the band’s signature charm and it’s certainly not a totally failed attempt at a comeback. But as far as albums go, it just doesn’t have enough mustard to warrant a second listen.

By the end of the album, one can’t really tell the difference between, say, “You And Your Blues” or another dud, “The Trouble With Never”.

Once the screaming guitars and flamboyant drums were over, the one thing this album left me with was a creepy image of geriatric men with canes rocking out in front of several thousand people. Mercifully, I didn’t imagine them in spandex … whoops, now I did. Score: 6.5/10.

2 thoughts on “Van Who? – Fiery comeback album a stable return”