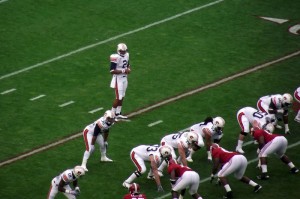 Rivalries. Everyone’s heard of them whether their arguing over which school is better, posting on social network sites about wins and losses or having so much school pride they practically bleed the colors.

Being on a team or a fan of a team that beats their biggest competitor is the most elating feeling in the entire world.

Being on the opposite side of the equation? Horrendous. (After watching many of the rivalry games over Thanksgiving Break I’ve felt both sides of this).

Throughout the country, there are many of them (University of Florida, versus Florida State University, Auburn versus Alabama, University of South Carolina versus Clemson and Oklahoma versus Texas).

The UF and FSU football game played on Nov. 26 began with an FSU fan stomping a UF’s fan head into a sidewalk (causing a concussion) and ended with fighting throughout the UF campus and many upset current or hopeful students and die-hard fans.

There comes a time when rivalries are taken to far, the teams fight too much, and the competition to be a better and more prestigious school is based on sports, not academics. In hindsight, college football is one thing; a game. It normally happens on a Saturday night and ends 4 quarters later.

I grew up in Columbia, South Carolina, the place where being a University of South Carolina fan working for a group of Clemson fans could lose you a job. Clemson is located about two and half hours away and if you set foot in either of the city boundaries on a big game day with the opposite colors on, plan on getting beat. These rivalries are ridiculous.

Though I grew up a diehard USC fan I know that Clemson has a highly competitive engineering program and if I was interested in that field of study I would get over my stubborn school pride simply to benefit my education.

It’s time that current students and alumni alike, forget sports and focus on a quality education.

The school you decide to enroll in shouldn’t be based on their football team or the divisions it’s in. College is about the grades you receive and the future job connections you make so you end up successful. Not about if your school was a top ranked Division I team, which excelled in the Atlantic Coast Conference or Southeastern Conference.

One thought on “Opinion: Choosing fanhood over merit”