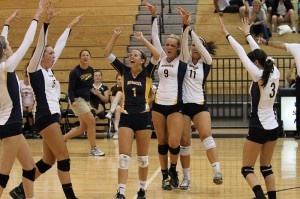 LUTZ – As senior libero Cary Anne Bame walked off the court of Steinbrenner Gym for the final time in her high school career, she looked around. From the banners hung around the bleachers baring her and fellow seniors names, to the fans in the stands. As she gazed, the reality that her third and final regular season at the school she helped win its first district title in 2009 had concluded really didn’t seem real.

“It hasn’t sunk in,” said Bame. “It’s kind of a weird feeling…now just thinking about it, that’s the final game of my entire high school (regular) season.”

The emotions were high from everyone before the game, as Bame along with seniors Miranda Powell and Audrey Clifford were honored with flowers and a large gift bag as they walked down the row of their teammates with their parents beside them.

The ladies (21-4) kicked off the first set with multiple kills from Powell who cushioned the lead and eventually after a comeback attempt by Armwood (4-11) ran away, taking the set by 10 points 25-15.

In the second set, Bame was moved to middle hitter from her original libero position and junior Natalia Campos filled in. The team would keep up the first set momentum, ousting the Hawks 25-17 in the second set and again in the third set to finish off another sweep, securing win number 21 on the year.

Now with the regular season in the books, the attention turns to the Class 7A District 9 tournament at Gaither for a possible three-peat as champions. Bame says the team is ready to go all out.

“We’re in it to win it,” said Bame. ” There’s nothing else except for winning in our eyes. We’ve been practicing harder, we’ve been running a lot and conditioning to play those five games.”

Bame also says that while the team is prepared, the gameplan for the district tournament is still up in the air.

The ladies will travel up the road to Gaither for the tournament starting on Monday at 7pm and the championship game will be played on Thursday. The match-ups will be announced later in the week by the Florida High School Athletic Association according to each teams specific ranking. The teams are seeded as follows:

Hear Bame give her thoughts after the win over the Hawks by clicking the link below: