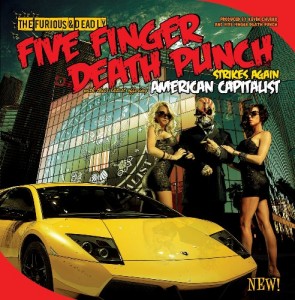 Five Finger Death Punch released their new album “American Capitalist” today, and all over the country metalheads are rocking out. The third album by the band was their most anticipated since their 2007 debut single “The Bleeding” and it didn’t disappoint. From their title track “American Capitalist” to the last “The Tragic Truth”, lead singer Ivan Moody picks up where he and the band left off with their 2009 release of “War Is The Answer”.

Not only does the new cd bring the heavy (“American Captialist”, “Under and Over It”, “Wicked Ways”, “100 Ways To Hate”), but it also packs the punch, no pun intended, for those who enjoy a little melody in their rock (“Back For More”, “Generation Dead”, “The Pride”, “Remember Everything”). The song “Back For More” was avaliable for listening in Electronic Arts’ Madden 12 and with that the flame took off with the album and fans everywhere were attempting to get their hands on it in the days and weeks prior to its debut.

Some have criticized the new album as being “mainstream radio junk” (much like Seether’s new album), however with the exception of “Remember Everything” and “Back For More”, the album is something you’re more likely to hear on Sirius-XM Liquid Metal than on 98 Rock.

“The Pride” is one of my favorite tracks on the cd. If you have ever heard Billy Joel’s “We Didn’t Start The Fire”, speed up time about 30 years and you will get the modern day punch in the mouth that this song brings. It explains some of today’s devices and addictions Americans face (Facebook, television, etc.) and wraps them up into one neatly giftwrapped box ready for your listening enjoyment.

The cd is worth the $9.99 on iTunes ($13.99 for deluxe) and iTunes even allows cheaper pricing if you have already purchased both singles. Five Finger Death Punch is a true example of how rock music is still alive isn’t becoming the pop, Creed garbage you hear on various stations today. And while the neighbors might hate you for cranking it to 10, your ears will thank you.