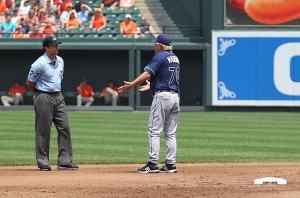 It’s a decision that may never leave the minds and hearts of the Rays faithful around the Bay area. Rays manager Joe Maddon deciding against the hard throwing rookie lefty Jake McGee and using a broken and rusty J.P. Howell to pitch against former-Devil Ray and Texas Rangers slugger Josh Hamilton. While many may see this as a quick slap at Maddon and his seemingly flawless decision making throughout what has been the most unexpected and exciting success story since the 2008 World Series run.  But this isn’t. This is just a quick solumn raise of the brow to a bad decision from the start. David Price pitched a superb game with no run support. The decision to play the left hander vs. left hander “match-up” game with Hamilton is smart because it has worked in the regular season and it worked with the 2008 playoffs against both the White Sox and Red Sox, but using someone that should likely be used in a mop up role against one of the hottest and Ray-killing hitters in the league can and most certainly should be questioned. Brandon Gomes, a rookie, came into the game and ended up taking the two quality relief appearances and throwing up on himself. With seven (terrible) out of the zone pitches in a row to lead off the appearance, many believed it couldn’t get worse…but it did. And along came J.P.. His magical season in 2008 may have sparked some Rays faithful to believe in their team and their manager’s decision to throw in Howell, but they were blinded by the sheer hope in number 74.

Now, if  Howell would have struck out Hamilton or forced him into a double play we would all be praising Maddon for his faith and trust in his young pitcher, but that didn’t happen. So now, we all wonder what could have been. If McGee hadn’t pluncked a batter in Texas, would Maddon have given him the ball? If Howell had remained consistant throughout the regular season, would the fans cut him more slack? Those questions will never be answered. And now the waiting game begins. If there’s nine innings left in the season or eighteen. Maybe even beyond that? Let’s not think that far ahead. Focus is evident with this group of players, they’re “too dumb” to realize how much pressure the area and baseball itself is putting on them. They can still get this done, but this decision will linger and it may never go away.