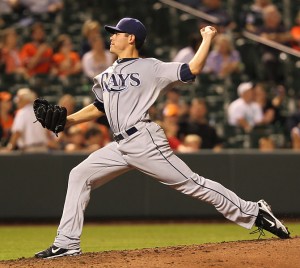 Matt Moore struck out 11 batters in his first MLB start

There wasn’t any question what propelled the Tampa Bay Rays towards their run for the American League Wild Card spot, it was the young faces like Matt Moore, Desmond Jennings and key bullpen pieces like Jake McGee and the Joel Peralta (who has filled in for long gone Joquain Benoit quite nicely in the set up role).

The hitting demons that seemed to curse the bats for most of the season has fizzled away, much like Boston’s lead in the race (over nine and a half games headed in September). And without the hot glove of Jennings in right field, we wouldn’t be discussing the race because there wouldn’t likely be a race to the finish line.
While the Rays may end up missing the postseason, the team will be remembered by many in the baseball world as a team where payroll truly didn’t matter in their quest for the playoffs, the performance outplayed the money. TAKE THAT CARL CRAWFORD!