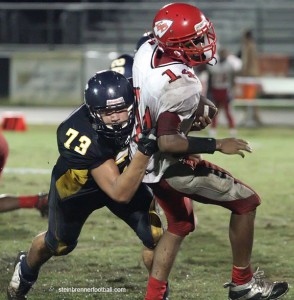 The Steinbrenner Warriors finally broke into the win column on Friday night against the East Bay Indians, but it wasn’t the prettiest of games. Heavy rain prior to kickoff soaked the field and it showed as both teams had a hard time holding onto the football combining for 11 fumbles.

The Warriors (1-1) received the ball to begin the game, and used their ground game effectively to get the offense rolling just four minutes into the first quarter. But the attack was short lived after an outside handoff the sophomore halfback Jake Carroll slipped through his gloves and onto the soggy turf and the Indians jumped on it to force the first of many turnovers of the evening. With momentum and good field position on their side, East Bay (1-1) sophomore quarterback Tajee Fullwood took his speed to the ground, shaking off multiple defenders and getting into the end zone for an early 7-0 Indians lead. Steinbrenner would not let the early points get to them though, as the offense led by a heavy dose of rushing and junior halfback Kendall Pearcey drove down the field to put the Warriors in position for a touchdown. Receiving the handoff from about a yard or two out, Pearcey busted through the line of defenders for his first touchdown of the season and junior kicker Jess Weatherman put the extra point through the uprights tying the game at seven.

In the second quarter, sloppy tackling on the Warriors defense let the Indians use their ground game led by Fullwood, junior running backs Brandon Byrd and Quantavious Gibbs kept the ball moving but the drive stalled and Steinbrenner had a chance to claim the lead midway through thanks to some big runs by Pearcey and Carroll. But again, the fumbled would continue to plague the Warriors as East Bay junior defensive back Saleem Lintz picked up a fumble and took it 75 yards for a huge touchdown, which gave the Indians a short-lived 14-7 lead. However on their next possession, Warriors sophomore quarterback Curtis Fitch rallied his team when he hooked up with junior wide receiver Jon Marc-Carrier for a 40 yard touchdown pass to tie the game going into halftime.

East Bay began the second half with the football, but couldn’t muster much on offense as Steinbrenner senior Alex Vega, who was moved from offense to defensive line after an injury to senior starter Zach Boryla, was all over the backfield driving the Indians offense backwards throughout the second half, giving the Warriors plenty of momentum to start an offensive drive after a punt. The Warriors would once again begin to march down the field and newly entered quarterback Logan Lepace threw a bullet to Carroll giving Steinbrenner a 20-14 lead after the missed extra point.

In the fourth quarter, both teams continued to battle back and forth. The
Steinbrenner defense kept the Indians out of scoring position until the last minute when East Bay attempted to throw up a miracle as time expired, but sophomore Bret Byler took down the quarterback to give Steinbrenner their first victory of the season. Both teams will be on the road next week, as the Warriors will travel to Dover to meet former district rival Strawberry Crest and the Indians will take a trip to Bloomingdale. Both games begin at 7:30pm.